[[ UPDATE (27/2/2014): We have released this design as a PDF pattern! What started as the yellow hoodie has now become an actual pattern with a lot more design details than the original. More flattering, better thought through, a sweater and a dress version, and a collar option next to the big hood!


I know, it's been over two weeks since my last post. I've been working hard on this project, but I got the flu when I was almost finished. I tried to keep sewing, but try sneezing with pins in your mouth...

The reason I made this is because I only have one sweater, so a second one is more than welcome. It's my second big project since I started, and I also designed this one myself!


Its made out of jogging fabric which is soft on the inside so it's super comfy and warm. I've written before that yellow is not my color, but I just couldn't resist when I saw this mustard yellow. Besides, the other colors of this fabric were weird, so I had not much choice anyway. 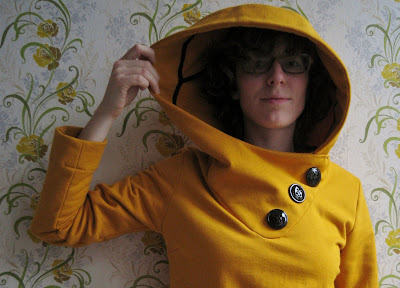 I made the hood a-symmetrical, with big shiny buttons. They don't do much though, they're just for the looks. The seam of the hood runs horizontally which makes it bigger than normal vertical hoods. I got this idea from my niece's coat. She was so kind to take measures and make a drawing for me. It took me a few days to get it right though, but I'll show you more about the process later on. I finished the visible inside seams with some black bias tape.

Above you can see the way the hood drapes beautifully over my shoulders and back. This is also due to the horizontal seams. I absolutely LOVE this hoodie, and I think I'll use it as a foundation to build my personal style on. I have already some other ideas for another one. A third sweater would still not be overdoing it, don't you think?