So now the colour was fixed and it had a slightly better fit, but I still found it boring. I wanted to do something with it, but I just couldn't figure out what. The colour is still a bit twee so whatever the alteration would be, I didn't want to emphasize that. Finally I decided to turn it into a cardigan. You'd think it wouldn't take me that long to come up with something not so spectacular, but it took me at least another half a year! I used SnugBug's method of using interface to stabilize the new edges. It worked perfectly, no wobbles at all! I bought the buttons here in Sogndal. They cost me three times as much as the sweater had cost me! I chose these black and white polka dot buttons because the whole gave me a retro feeling. 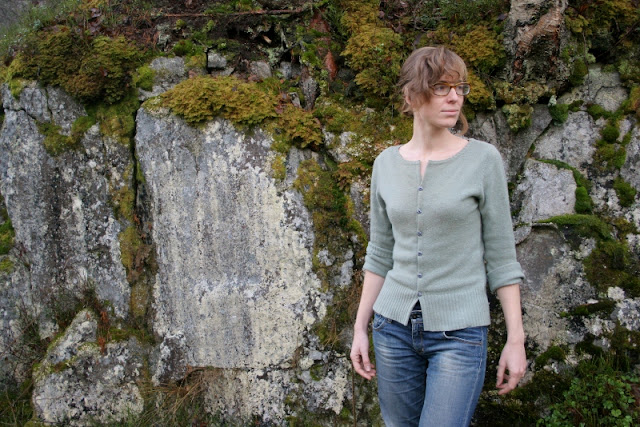 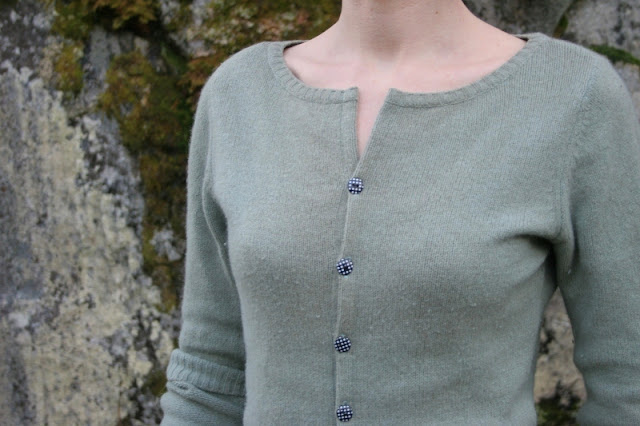 Hm, this background it quite pretty too. As you can see the buttons are a bit too far on the edge, and the space between them is uneven. Stef made me think about this as he suggested that it would make more sense to place buttons in places you need them, instead of evenly distributed. In that case, it would make sense to have more buttons at the top as there is more tension on the fabric. I'll definitely take this into consideration next time! My buttons are actually wider spaced at the top than at the bottom, but it doesn't really bother me. Still I consider this a very succesful refashion as I will wear it more often and feel much better about it when I wear it!

P.S. The maxi skirt refashion turned out fabulous, more on that later! And in case you're wondering, I'll be making things from scratch again really soon. Especially because there's a serger waiting for me at home! YAY!
2 comments:

Your thoughts on this


Have you ever seen such a maxi skirt? I bet you can't find a skirt crazier than this one. Who would wear this? I think it's actually self made: the hem is basted by hand and the seams are unfinished. I found it at a second hand shop in Bergen and I bought it for the fabric. At first I had grand ideas: I wanted to cut off most of the bottom and make the skirt fit into a high waisted pencil skirt. With the remains I would make this wrap top. Or, just lift the whole thing up and make a fitted dress. But then Stef said: this is way too much 80's print. How are you going to make this look modern? Why not use it as lining, or accents? And seeing as he is usually right, I don't know what to do anymore. People, what would you do with this fabric?
10 comments: 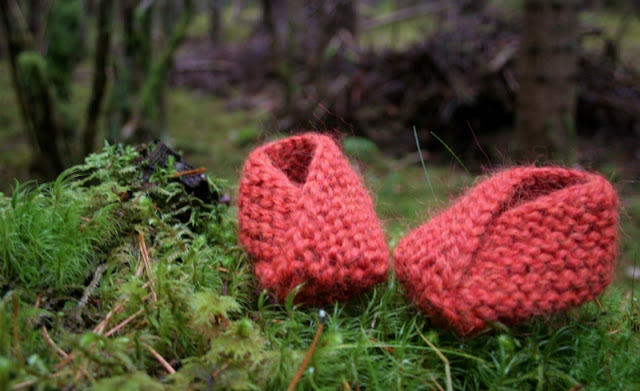 The 'friends are having babies' phase has definitely arrived. These little kimono slippers are for a little girl called Effie (Euphemia), born in Athens a month ago. I don't think her mother reads my blog so I hope it's safe to post them here. They are super easy to make: knit a tiny T-shape, join the short ends together and then sew the long ends together (see blog and ravelry). A perfect way to create something cute out of yarn leftovers. These were made from 100% Alpaca (not leftovers) in a beautiful deep orange, not very well pictured above. I used the other half of the skein for another tiny human, but I think his father does occasionally read my blog so I won't show them here. (Also, I can't, because I forgot to take pictures before I mailed them.)
4 comments:

This find was found in Sogndals tiny thriftstore - a huge men's knit sweater. Unfortunately I have somehow lost all the before photos. You'll just have to believe me when I say it was HUGE! I wore it before I refashioned it because we went on an excursion to a cold and windy island on the coast. One of my classmates said: 'Nice potatosack'. I think I could actually fit in it twice. Normally I like it when things are so big, it gives you room to play with. But resizing a coarse knit? I am a bit scared of the effects a sewing machine can have on that. But, when I was knitting something else and finishing it with a matress sitch, I thought: why not use this on my sweater? 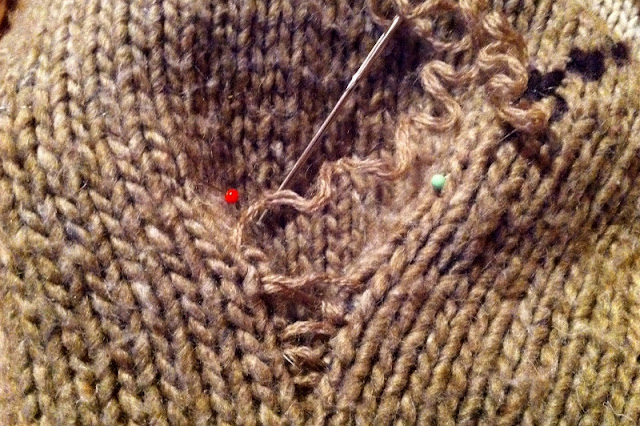 And it worked! Even on the sleeves - they were hanging halfway down my upper arms so I had to do something about that. I took off 20 cm in total on the sides and 10 cm on the sleeves. Next step was to secure the seams so I could chopp the excess knit off. I did not trust a plain zig zag to keep the knit from unraveling, so I took a strip of bias tape, cut it into narrow strips and sewed it onto the seam. 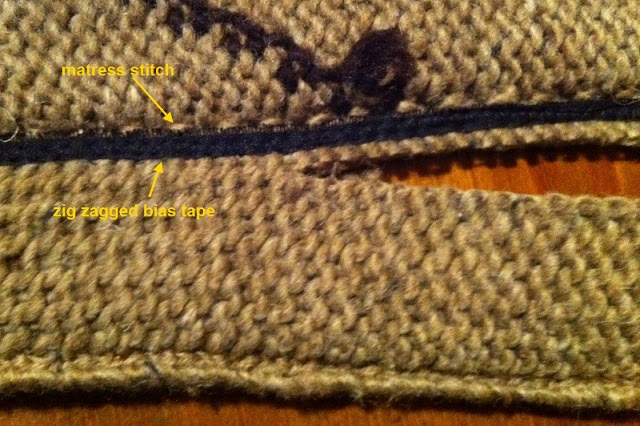 I also took off the weird little collar it had, and finished the edge with bias tape. And I added elbow patches just for fun, I really like that look you see everywhere this fall. 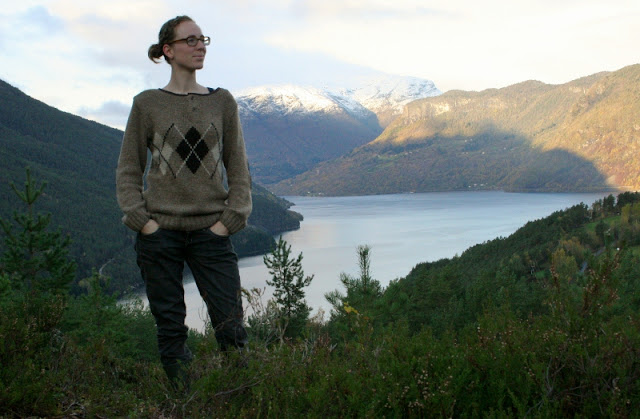 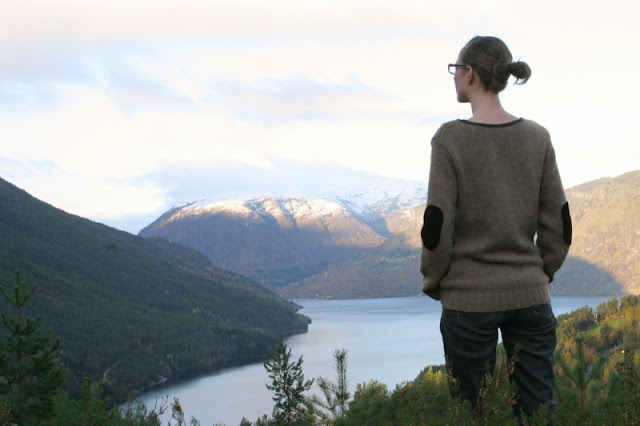 When you're in an other country, in a village without any proper resources, and it's Halloween, what do you do? When I was in Peru nine years ago, two Canadian girls showed me how you can make a great Halloween costume with just using tape and garbage bags. I've been wanting to do this again ever since, and last week I finally got the chance. When you say 'I'm going to make a princess dress out of garbage bags' it doesn't actually sound that nice, but the outcome recieved quite some compliments. It started as 'Garbage Princess' but then the Cheshire Cat turned up and somebody called it 'Alice in Garbageland'.


I did not take any pictures of the making, unfortunately. You make it by draping the bags on yourself, as you would do with fabric on your dress form. Beware: once you start making it, you can't take it off anymore. Wear something nice underneath so you can take it all off in public later (see below). You start with one garbage bag wrapped around your waist, and attach the body and sleeves. Then you bind off 6 big and 6 small garbage bags with air in them, and tape them to the body. The black part is to disguise the tape that holds the skirt part. It would have looked better in blue, but we were out of blue bags. I used 17 garbage bags in total.

Once you're out in the town they deflate a bit because of people bumping against them, but the effect stays. Dancing proved to be a bit difficult, as you get really hot wrapped in plastic. But then, having people ripping the bags off you is also quite fun :)
1 comment: