Growing Up & Moving On

Today is my blog anniversary! 4 years ago I started this blog with the idea to write small stories about things that mattered or that caught my attention. At the time I had the feeling that I had lost contact somehow with the small things (objects, ideas, words, thoughts) that are often more interesting than big things. No heavy thoughts, no world changing ideas (if I could come up with any :)), no all-embracing theories. That’s where the name Small Things came from. This concept lasted only two blogposts long: the third post was titled “Something Big”. We went on a hiking trip to the Adirondacks (NY) that turned out to be quite the eye-opener. When I came back I felt like I needed a new challenge in my life. That’s when I decided to use this blog to document a year without buying any clothes and instead start sewing. I had been sewing on and off since I was 15 but never had any lessons. I also felt like there wasn't really anything I was really good at, and I wanted sewing to become this thing.

What was supposed to be one year became two years, and then I just kept going. I haven’t become as good as I want to be yet, there is always so much to learn! But there's progress with every project. And something happened that I never even expected when I started: I became part of this amazing sewing community that just keeps on growing. I never knew there would be so many awesome and kind people out there that are so passionate about the same thing and who just keep creating and innovating ways to interact, and to teach, and to learn.


The two major things this past year have been trying to get started with our own patterns, and of course moving out of our house and into the truck, travelling Europe. Not as easy a combination as we initially thought! When you look at the amount of hours in a day it’s possible and we did find a way where we had most afternoons for ourselves. But in a time-sense it’s very different from each other: with a business you’re always thinking ahead, planning and creating for a point in the future. When you’re travelling you want to be in the moment, not worry about past or future and just enjoy the place and time you are at right now. Switching between these two was difficult at first but after a couple of months we found a kind of balance. However, you’re still giving up a little on both sides: you find yourself discussing business strategies while working in the vineyards at sunrise, and mentally reluctant to think ahead more than a month when it comes to new pattern releases.

Understand that I’m not whining or complaining: the past year has been really really awesome in many ways :) It’s just also been a learning experience, and I came to realise how much I want Paprika Patterns to succeed. I really can’t wait to start working full time and make all these ideas come true as fast as possible. Luckily for workaholic-me we’re about to settle down (for now) in France, where we’ll be living in a yurt this winter. A whole different story that you’ll probably hear more about in the coming months :). 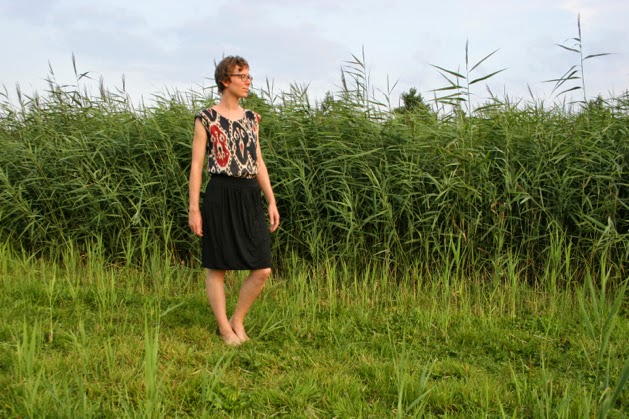 When we were staying in Italy Stef broke his collar bone and we had to stay in this one place for 2,5 months instead of the one month we planned. Since we weren't wwoofing anymore there was enough time for other things and Noella, the girl we were staying with wanted to learn how to sew. It was so much fun to teach her, she was so exhilarated after making her first leggings. The first project we did was to make a simple jersey maxi skirt, and because I had some black jersey I decided to make one for myself too. The result was ok, it was perfect in the sense that it fit well and the outcome was exactly as it should be. I didn't find it that practical though, so I pulled up the hem to make it into a kind of bubble skirt. 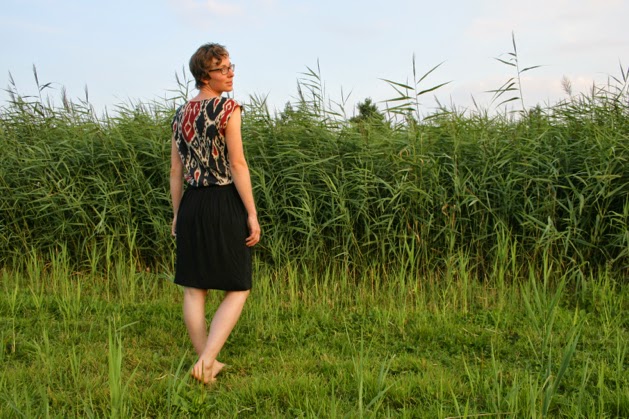 It’s more practical that way and I like the tapered silhouette. I gathered the front toward the center to take some fullness out of the hips, and left the back evenly gathered across the waistband. I even got some compliments on it even though it’s such a simple skirt. The problem for me with this skirt is that I got no satisfaction out of making it. It’s just too simple! I had become used to pushing myself a little with everything I made, getting better at a technique or trying something new with every pattern. This make had nothing new: it’s just two side seams, some shirring (my favourite way of gathering) and a waistband. Boring! 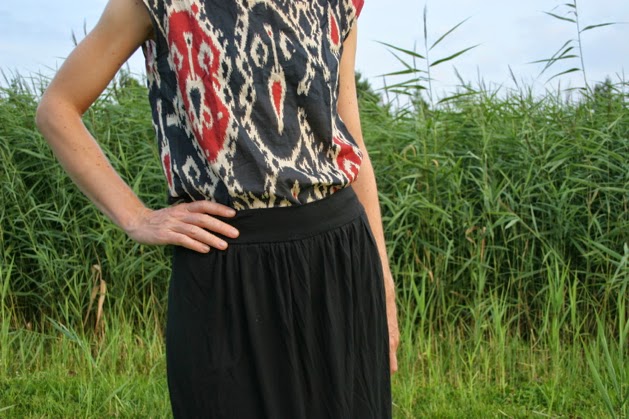 That’s when I realised: I’ve outgrown these beginners projects. I didn't think about this because it seems only such a short time ago that I would make these kind of things. I can understand how a woven skirt can give you more satisfaction because at least there’s a zipper involved. I made a simple linen one for Noella at the same time and that was much more satisfying. So when I see this skirt I think: meh. This didn't bring me anything but an ok skirt, and apparently that isn't enough anymore.

And as I have outgrown beginners projects, so I have also outgrown this blog. I haven’t felt as much at home here for a while now as I used to. I have even felt reluctant to blog here because of that. A lot of stuff has been documented here and I will keep that, but it’s time to move on! The first part of the Paprika Patterns website is online now, and from this point on I’ll blog over there. And I really hope you’ve enjoyed this blog enough to move with me! A blog is nothing much without it’s readers and I am so very grateful for your support over these past years. I still get really excited when I read your comments and see the stats. To know that you're there, reading, has been my justification to continue and to take the next step towards pattern making. THANK YOU. Now before I get too sappy, hop on over to the new blog and add it to your reader! :) You'll find a new post there with the annual roundup I like to do. I hope to see you there!
6 comments: