Part two of the quest to create the Perfect Shirt for Stef! I can already tell you that there will be a part 3 somewhere in the future, because this one still needs some fine-tuning. For the second and what I hoped to be the final version I used a medium weight linen-viscose blend. The viscose gives the linen some stability and also some stretch, which makes for a lovely fluid fabric. I bought it in Italy for pretty cheap, but in this case that doesn't say much about the quality. I only got 2 meters instead of the recommended 2 7/8 yards, but it worked without too much trouble. I almost ruined this fabric by using the wrong detergent (a homemade one made from wood ashes). It has some light discolouring stains because of this, but they're pretty evenly spread out and Stef doesn't mind. 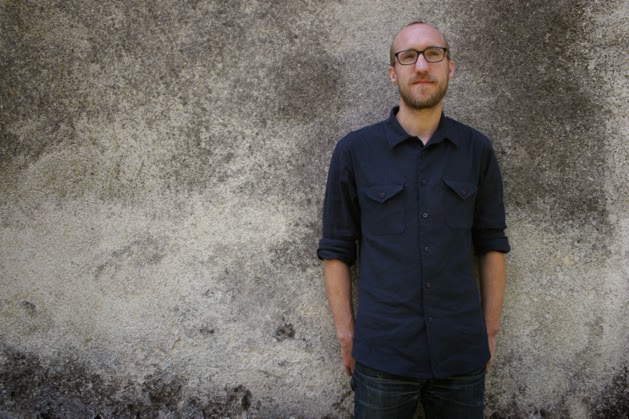 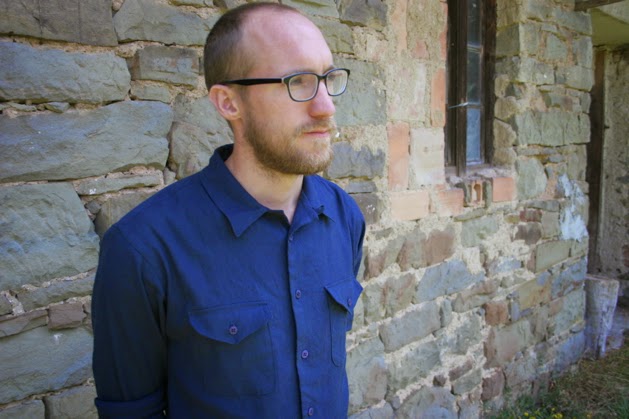 The adjustments I made were first to go down a size everywhere except the neckline. I sewed it up until the joining of the side seams and sleeves, and then did a fitting. It seemed good so I did the flat felled seams, proceeded with the cuffs, buttons and buttonholes, etc. But then when he tried it on it seemed too big again, at the waist but also the sleeves were a bit baggy. I apparently didn't pay enough attention, and so had to take out the flat felled seams again. I took in the sleeves and sides without altering the armhole, for about 2 cm on each side. I'll probably have to taper towards S at the waist next time. The shoulders are much better, although I think I'll take the armholes in just 0,5 cm (1/4") at the front. 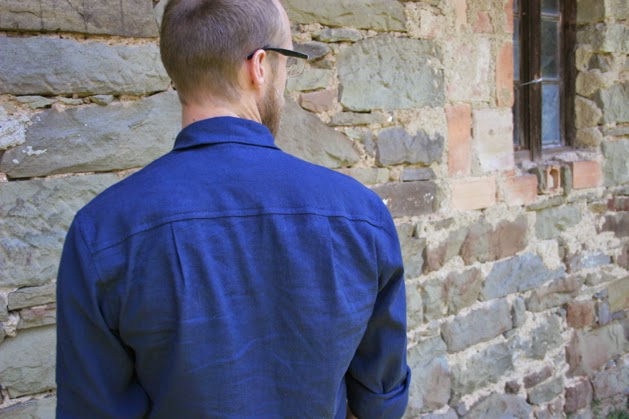 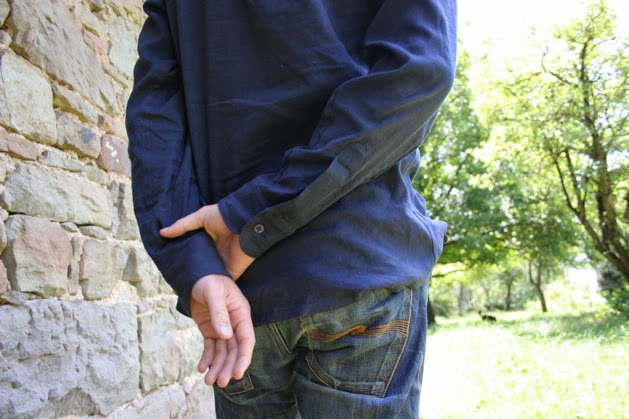 The back looks a lot better with the 2cm dowagers hump adjustment. It hangs more towards the body at the center back, and the draglines at the armhole have diminished. I lowered the yoke by 1 cm, but I think it could use another cm. I topstitched it because that gives it a more finished look imo. The plackets turned out very nice, I'm getting better at sewing them and I enjoy trying to sew them as neat as possible. 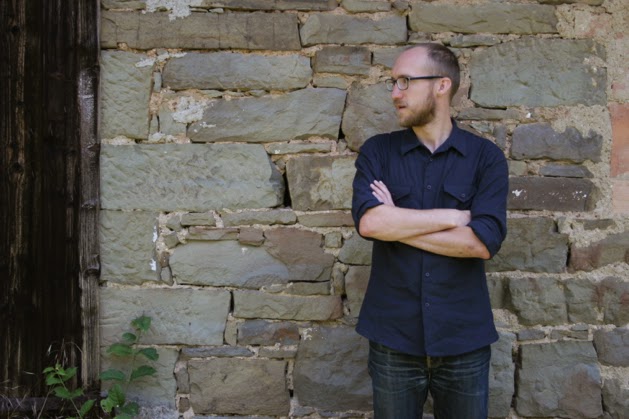 The 6 buttons are definitely better than 5, no gaping when he moves. I do still need to reposition the buttons a bit, the fronts are slightly uneven as the pockets are showing. This shirt still needs some fine-tuning, but I'm happy with how it turned out and so is Stef! Next time I actually want to try and give it an under collar and a standard button placket. Peter of MPB has done a tutorial on this for the Negroni. The clean lines of the front are nice but the facing adds more bulk at the neckline and front than necessary. There's a soft cotton plaid waiting for me at my mom's that would make a perfect winter shirt. The quest for the perfect shirt is put on hold for now, but I'll get back to it this fall!
No comments:

Sewing for Stef has become something I actually like. He wants to have his clothes just so, which means that I have to be precise and not stop until it is exactly how he wants it. I don't have to sew for him often, fortunately he holds the philosophy that all you need is one good version of everything. His favourite item to wear is a button down shirt, and since that is quite a lot of work I promised him one for his birthday. I know already he has some specific issues around his shoulders so I made a toile first, using a cheap blue cotton. The pattern we chose is Colette's Negroni. The instructions are very clear and it was interesting to compare construction techniques with the Archer. I chose size L based on his measurements, but either this shirt has a lot of ease or I measured him wrong because it came out way too big. I'll walk through the issues and solutions below, and the next post I'll show you the improved second version. 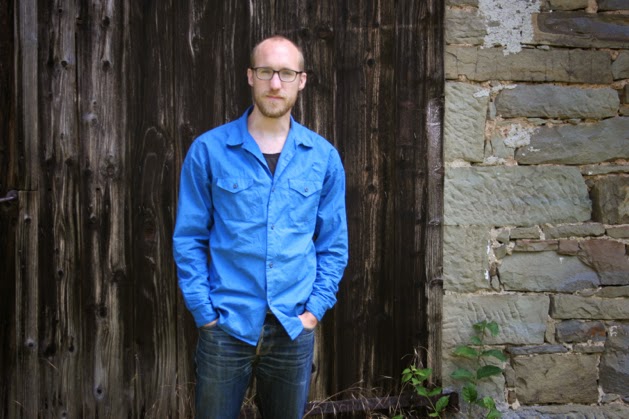 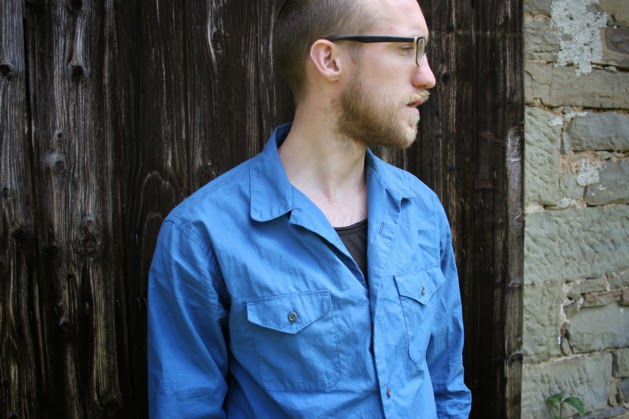 When I first tried it on him as it was after basting the side seams, it was gigantic. It was basically too big everywhere but the neckline. The only adjustments I made in this shirt were to shorten the sleeves  by 2,5 cm (1") and taking in the side seams (both bodice and sleeve) by 8 cm (3.5") in total, which made it kind of wearable. It was too bad I had already sewn the plackets by then because now he has some trouble rolling up the sleeves. The shoulder seam is hanging off his shoulder too but I didn't want to go as far as taking out the flat felled seams, since it was a toile after all. It should be higher up by about 2 cm ( a little less than 1"). 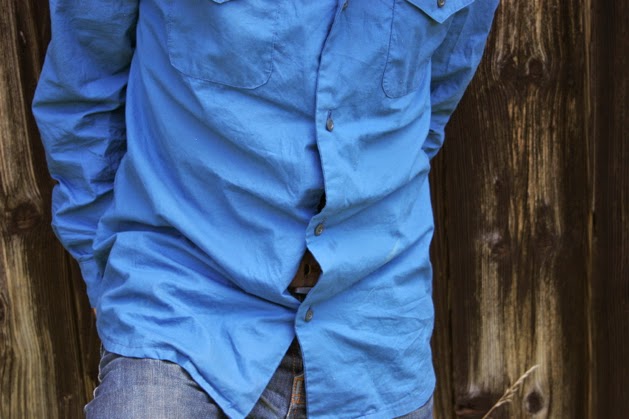 When it turns out too big you know you just have to size down, but what I don't get with this design is that it has only 5 buttons. This makes for big gaps every time he moves and makes the shirt more bulky looking. I've seen other people also use 6 buttons instead of 5 and I think this shirt really needs 6. 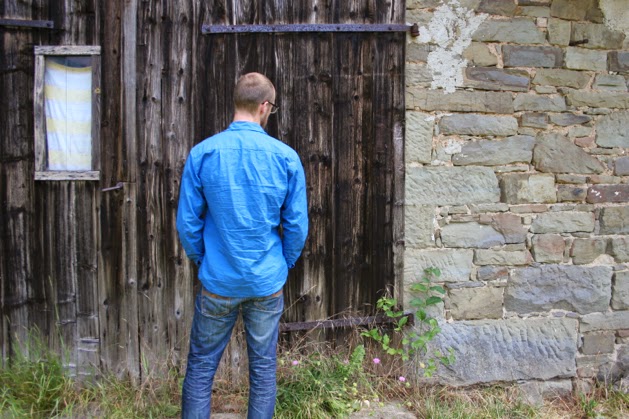 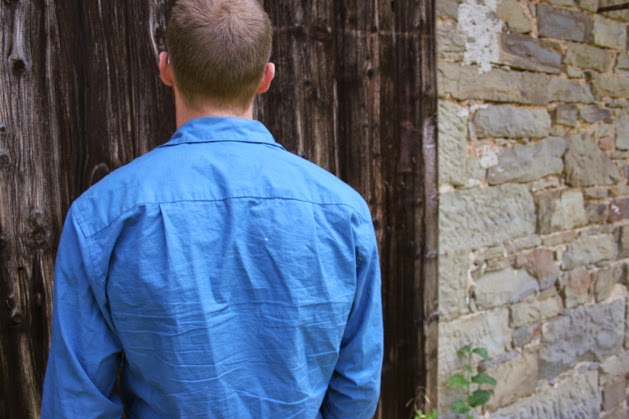 On to the back! There's a couple of things that could be improved here. First of all, there are some diagonal lines running from the pleats to the armhole. Sometimes this could be the result of sloping shoulders, and then the solution is to taper off the back towards the armhole along the top, lowering the armhole at the same time. (Peter from MPB writes about that here). In Stef's case I suspected it could also be the result of his rounded back, or dowagers hump. Seen from the side his back has an S shape. Because his shoulder blades kind of stick out, they pull up the fabric at the center back. The fabric pulls at the armholes because of that, and it also swings outward at the hem. By giving him more room in that area the diagonal creases should disappear, and the fabric should have more room to follow the curve of his back downward. Another tip I got from a professional seamstress we met a couple of weeks ago was to extend the yoke down by 2 cm. This doesn't do much for the fit but it would look better proportionally. Next up: the improved version!
2 comments: