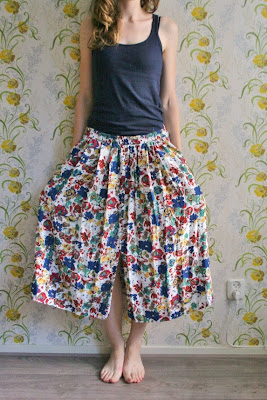 I bought this skirt for 3 euros last month in Antwerp, Belgium. There was a matching shirt, but although I like the print, that would have been a bit too much. The thing that fascinates me about this skirt is the split in the middle. Why on earth would you want a split there? That center front seam made the refashion process a bit more difficult.
I had a different skirt in mind, based on a RTW skirt I owned. I loved that skirt, but unfortunatey the mice that we have in our walls tend come out at night. And I happened to have left the skirt lying on the ground, withdog treats in the pockets. Instead of just looking for an easy way to get to the treats the mice just ate right through the fabric. They did the same to two pairs of jeans, including the mustard one. (In case you are reading this, mice, WAR IS ON. Please leave my house or I'll gently catch you in animal friendly traps and put you outside in the cold.) The skirt couldn't be saved, which was sad, but also a good opportunity to take it apart to see how it was constructed. Thank you Sewing for providing a silver lining!


I ripped every seam to get the most out of the fabric. And although it looks as not much has been altered, I barely had enough fabric for the design I wanted. My mom thought I should make the skirt really short, but with winter coming, I went with knee length again. 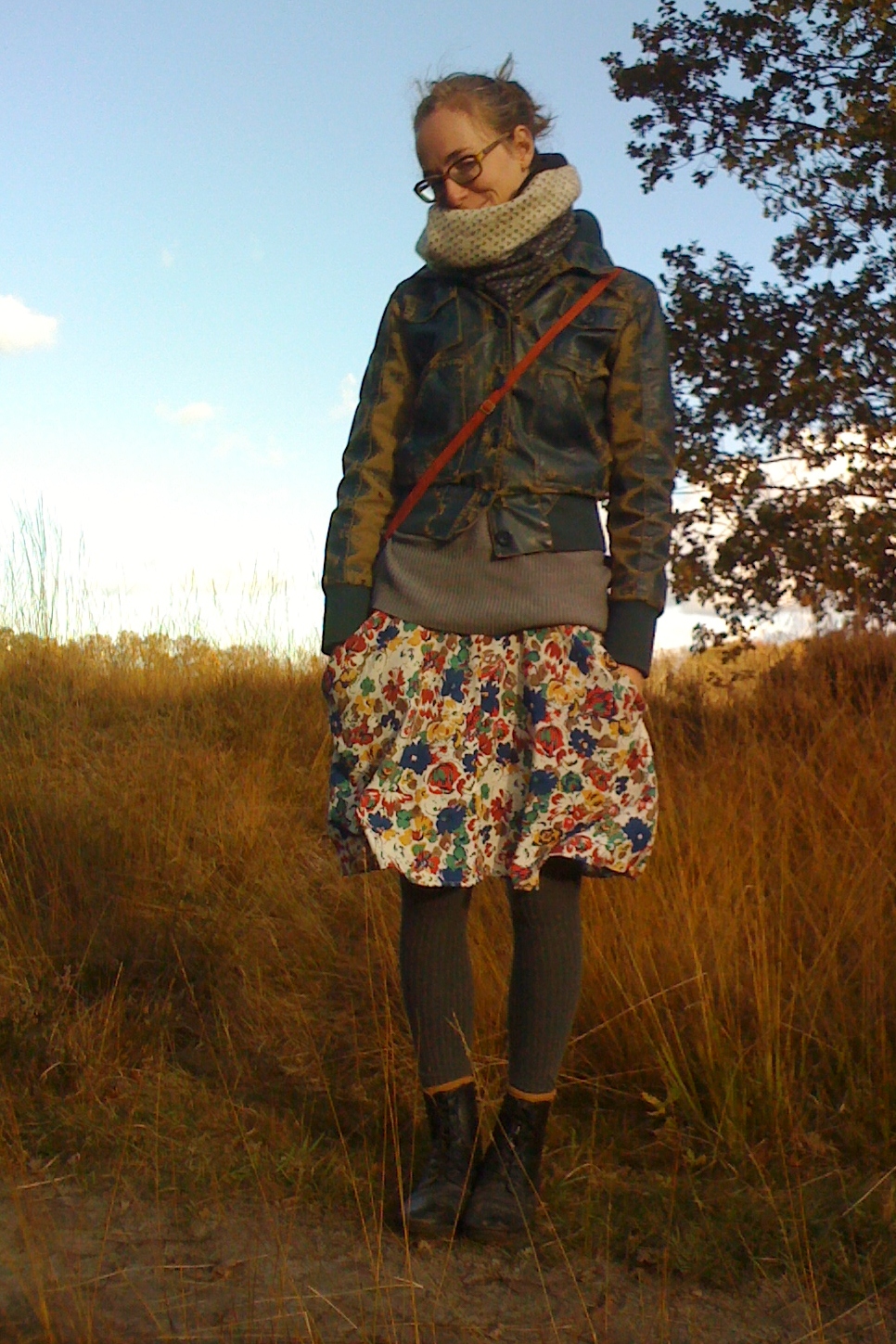 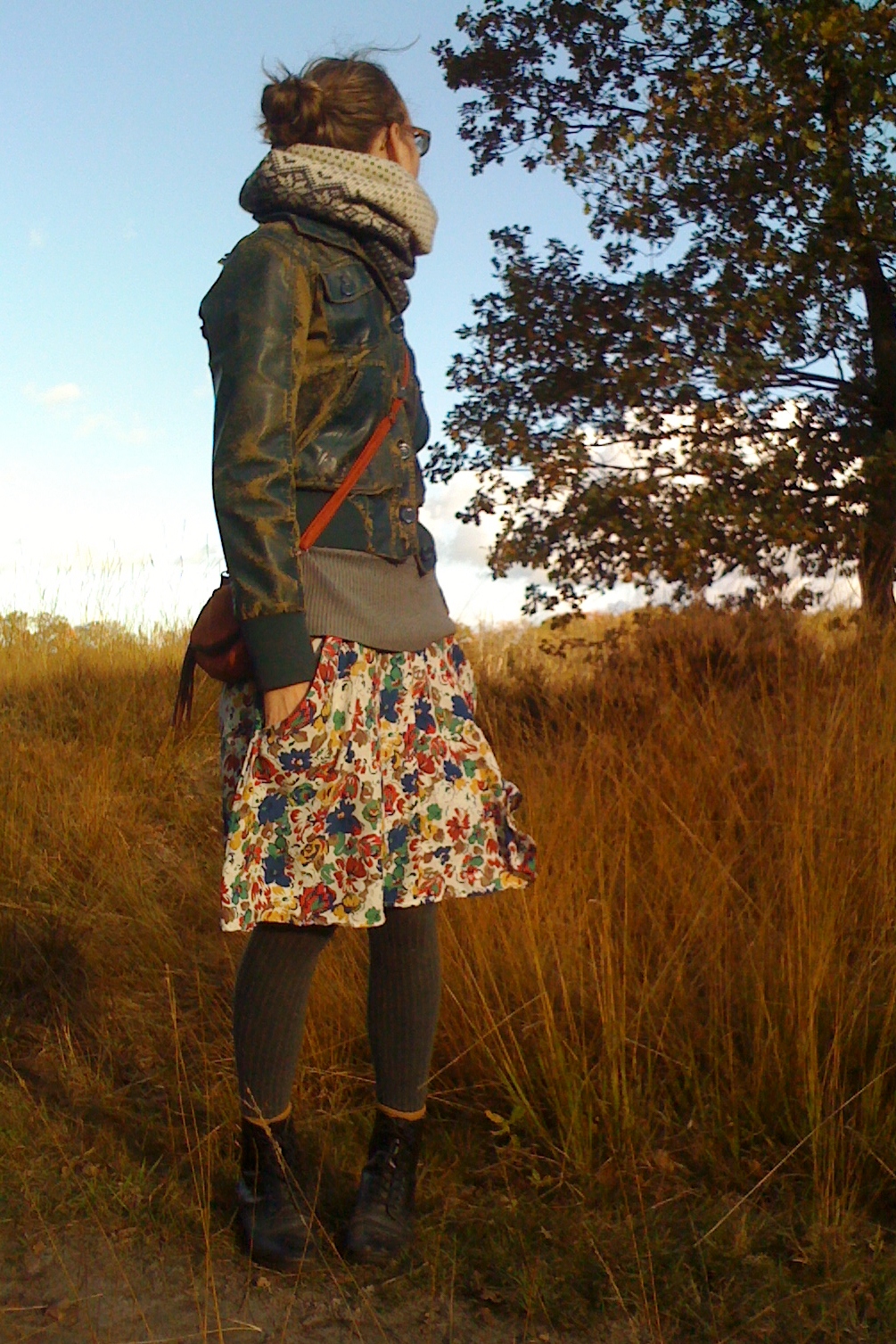 The original skirt already had in-seam pockets, but I wanted big pockets that stand out from the skirt. The colours of the lining and the ribbed waistband matched perfectly so I recycled them. There's no zipper, the back of the skirt is sewn to a stretched waistband. The front of the skirt is smooth, but the back looks gathered and has the elasticity so you can get it over your hips. 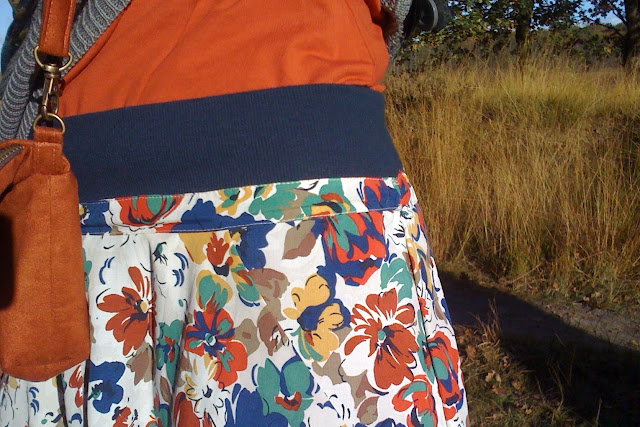 Above pic shows my hip and a pocket. I really like the finish of this skirt. You sew the waistband and skirt together with the seams on the outside, and then sew a horizontal strip over the seam. This way you don't have to finish any seams. There's a lot more to show and tell on this skirt actually, but I'll wait with that for later. It's enough to say I'm happy with this refashion, and it made me discover the joy of wearing fluttery skirts in cold weather!
6 comments:

...next year? Yes, I did it again: making something for summer when it's basically almost winter. I so love this sweater though! I'm planning to sew up some Renfrews to wear underneath. I've already shown you the pattern I used, from the 1980 July edition of Ariadne. 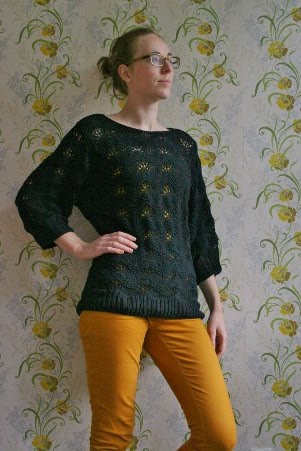 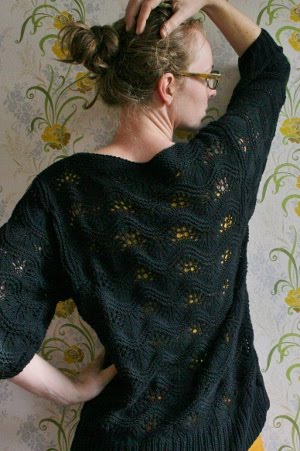 I can't really say how long it took me in hours. I just know I started knitting in May or something. It's not that the pattern is difficult, it's just that I tend to get bored halfway. The consequence being the I now have a sweater with lots of holes and knit in cotton to keep me warm this winter. I'd better get started on those longsleeves :) 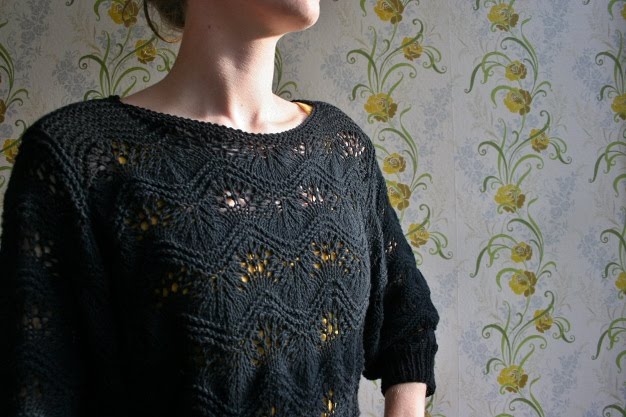 The biannual fabric market was in town again, and I just had to go. I'm still looking for fabric for my winter coat after all, and now that I've used up most of my stash this summer it's time to get some new stuff. There were about 160 stalls, and to be a bit more focused than last time, I made a list of what I needed. I am proud to tell you I stuck to it for the most part! It wasn't even that hard, I know by now that if I were to get more than 4 or 5 different fabrics half of it will just not get sewn this winter. And then who knows what my taste will be like next year? 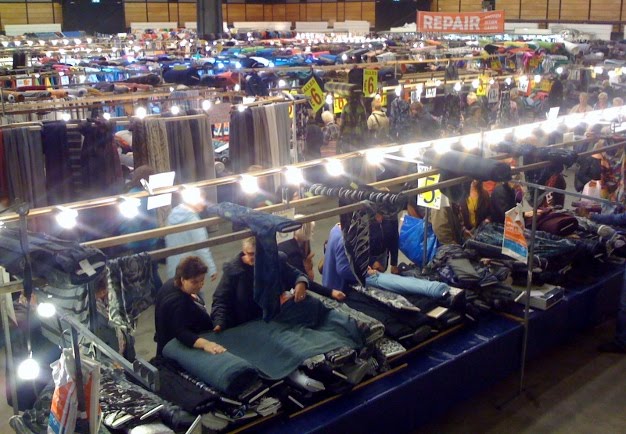 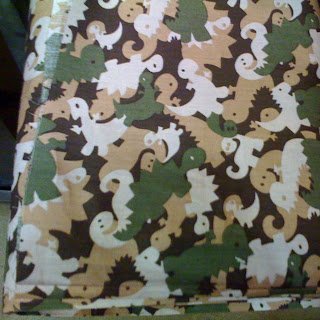 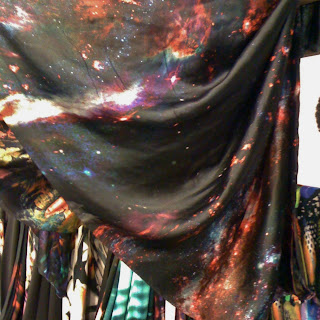 I came upon two fabrics that seemed familiar. I know I've seen Karen make a skirt out of the dinosaur camouflage, and I think I've seen the galaxy fabric somewhere too. Isn't it awesome? This one's silk by the way. You can start drooling now. Check out Spoonflower if you want some of your own. 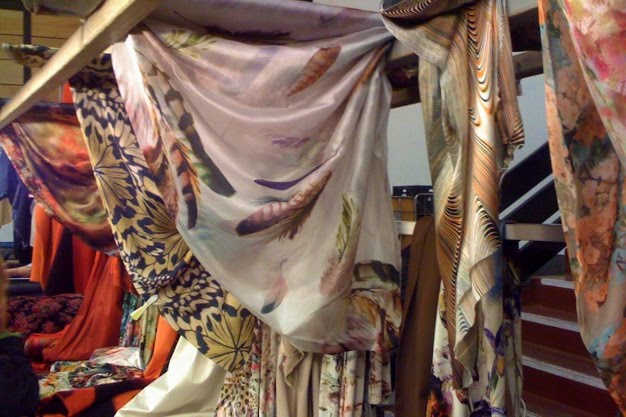 There was one stall that had lots of gorgeous silks. And you know what? I've decided to treat myself to the one with the feathers. I've been drafting a blouse pattern in my weekly class, based on the blouse I bought. This silk would be perfect for it! It's a great opportunity to learn how to sew with delicate fabrics. And a great opportunity to wear something beautiful :)

These are the fabrics I got. If you follow Delightfully Tacky, you might recognize the cat fabric. She recently posted about a dress from Modcloth, by designers duo Dear Creatures. The one from Modcloth has mustard cats, the one from Dear Creatures' website has red cats. And now I'll have them in rust!  I recognized the fabric and snatched it away immediately. Not exactly on the list, but hey, who can resist at €7,50/yard? It sure beats getting the dress for 103 dollars... The second fabric is a soft knit jersey. Both of these are destined to be Renfrew-like tops. The forest green knit will be a cardigan, and the coarse Norwegian knit has already been turned into a big loop scarf. All in all, I spent only 38 euros for 5.5 metres! Not bad, eh? I didn't buy fabric for my coat, but I did find it. It's just that I found the exact same fabric the day before at the regular market for 3 euros/metre less, so I'll have to wait until next tuesday. Can you guess what colour it is? I'll surprise you, I promise :)

This time made for Stef! The second (and last) piece for Steftember was finished about a week ago. Judging by the amount of wear it already got, I did a good job. I used a German pattern called Fehmarn. It came with the instructions translated in Dutch, which was nice. The fabric is the same as my mustard hoodie, they restocked it. It was basically the only option we had (other than colours like beige and mint green). I wanted to get a darker fabric for the lining of the hood and the pockets because I was afraid this yellow would make Stef look pale, too. We have about the same skintone, pale with freckles. He chose this navy jersey, and it was his idea to do the zipper in blue too. I wasn't quite sure, I thought the contrast would be too big, but it turned out great! 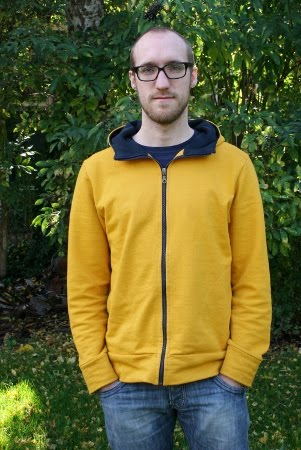 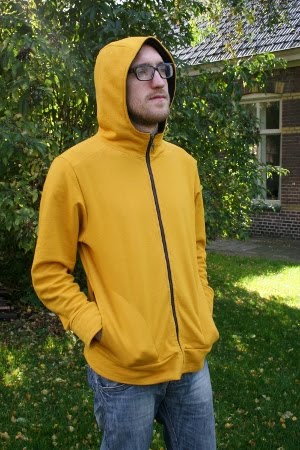 I topstitched the edge of the hood to prevent the lining from peeking out, but maybe I should've understitched it. Stef likes it this way, so I guess it's fine. I tried to work as precise as I could, thinking of lining up seams and all that stuff before sewing. I love this about sewing, I'm improving wih every garment I make but there is still sooo much to get better at! 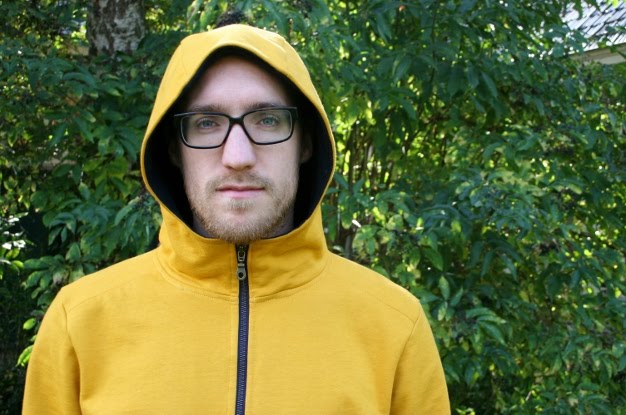 I like that this hood has a high collar, it makes a bit more warm and cosy. I cut out size L because that was best for his other shirt which is from the same pattern maker. But this time L was too big on the shoulders, so I had to take them in again. I also altered the sleeves, taking them in around the armholes. I also found the pocket entrance to be a bit shallow, so I deepened them to make it easier to get his hands into them. And to show off the lining. 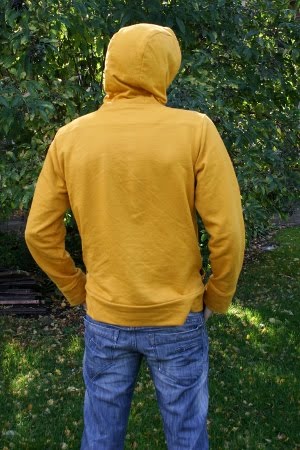 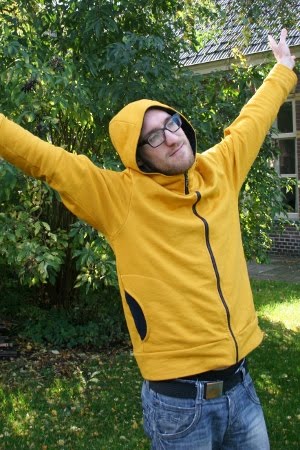 All in all I can really recommend this men's pattern! You get a lot of options (collar/hood, different pocket options) and it's just a nice contemporary men's pattern. You can use it like I did, but you could also make a sleeveless version, or a fleece jacket. There's some more examples over here. The whole package is not as fancy as Colette's or Sewaholics patterns: printed on regular paper and packed in a ziplock bag, no extra explanatory pictures. But it does it's job just the same.

Don't let Stefs serious face fool you by the way, he's happy with his hoodie! The proof is below.

I guess I'll interpret this as some sort of happy ninja dance. What do you think, would you make this for your man or would you rather go with a classic shirt?
12 comments: