When Stef decided he didn't like his Threadless shirts anymore, I knew immediately what to do with them. I pinned this shirt a while ago and have been waiting for an opportunity to make my own ever since. 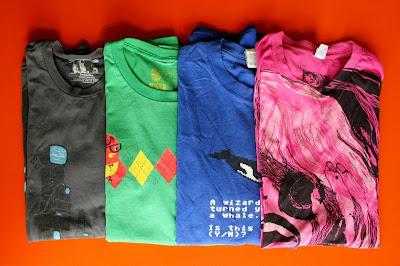 I used the grey shirt as a basis. I sketched a few alteratives and then transferred these lines to the grey shirt. I cut out those pieces, and used them as pattern pieces on the other shirts. I ended up not using the green shirt, but the sleeve of the yellow shirt I cut up last year. (Yes I saved a cut off T-shirt sleeve. No wonder my stash pile is so high.) 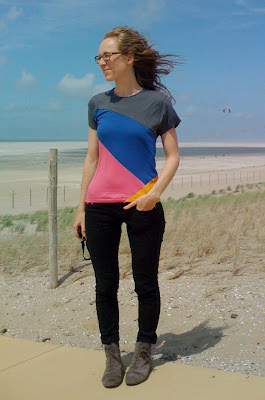 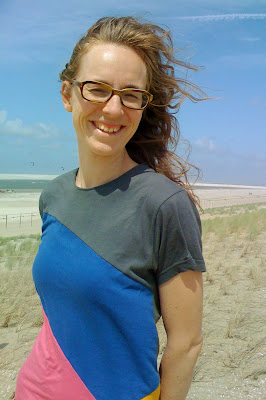 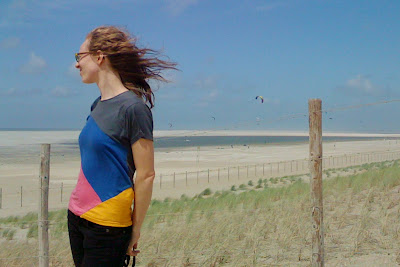 Ofcourse I cut out the patterns pieces the wrong way around. The pieces matched each other, but not the grey shirt. I had to cut a new blue piece to fix it. I was lucky to have enough fabric! The pattern is now different from what I sketched, but I actually like it better this way. The shirt is actually not as tight as it looks. The wind was blowing hard, hence the empty beach on a sunny day and lots of kitesurfers in the background. 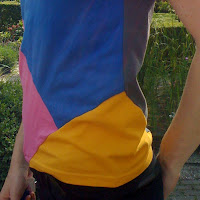 Besides making new side seams I also ripped out the sleeves, shortened them and reinserted them. And I folded over the ribbed neckband to make it a bit wider. Apart from the neckline, I made the whole shirt on my serger. I seriously love that machine! But my favourite part of the shirt is the triangular yellow piece. It is the only one that extends into the back of the shirt. I'm really happy with how it turned out, I think it fits in with the style of my current wardrobe and I finally got to try out this idea!
8 comments:

I almost forgot to tell you, but I 'won' my first Blog Award! I got it from Allison, from A Fabric Fixation. It's even more cool because I think she's one of my first followers since back in the days when I was still wandering around looking for my own style. Like, 1,5 years ago. That's one thing I love about sewing, you're forced to think about what you wear and what suits you. I'd probably still wear T-shirts and jeans if I hadn't started my challenge.

Anyway, back to the award. I know you're supposed to give it to 5 other people, but I'm not going to for two reasons. First, I don't follow any blogs who have under 200 followers and have not gotten it already.  Second, these things have to stop somewhere. If in the end everybody has one, it doesn't really mean anything anymore, right?

Anyhow, I'm really proud I got it, so thank you Allison!
1 comment:

This Is Not It

What I wanted was a soft, flowy maxi skirt. What I got was a stiff sack that got stuck between my legs when I walk.
I had a feeling the fabric was too stiff for this purpose, but I was stubborn and went with it anyway. I obviously did not have this Burdastyle pattern at hand at the time. The pattern is basically one big piece of fabric with a seam at the back, gathered heavily at the front and back, and gathered more lightly around the hips. I serged it to a jersey waistband so I woulnd't have to make a closure. After seeing the pictures I did some modifications to see if I could fix it. 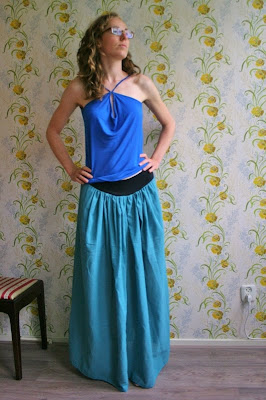 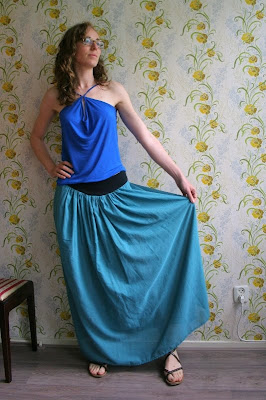 What do you mean, you can't see the difference? I obviously tried to fix the bulkyness by eliminating the small gathers at the hips. OK I know, it's still a sack. I did try to wear it out to dinner but Stef wouldn't let me. OK that's enough about this failure. Next, please!
P.S. I do like what I did to the top. It's a stretched out spaghetti strap top that I bound together at the starting point of the straps.
P.P.S. I also like the blues together. Might try this combo again. Just the colour, not the outfit.
12 comments:

Smocking Is For Old Ladies

You´ve had a sneak peak of this shirt, but now I´ll show you some details. It took me quite a while to get to this endresult. First I was actually going for this shirt. I tried to figure out the pattern and it sort of almost worked, but the fabric choice wasn´t quite right. Turns out you can't just replace a cashmere and silk blend with 5 euro jersey. (Who knew? Probably lots of people.) So then I had a shirt that was cut out for a drapey cowl neck, but I actually didn´t want a cowl neck shirt. So what to do with all this extra fabric in the middle? I considered a few options (Pintucks? A knot? Pleats?) until I remembered a friend who was planning to smock the back of a shirt into a V shape. You need twice as much fabric for smocking as you want the end result to be, and smocking was on my 'techniques to try'- list anyway. The perfect choice! 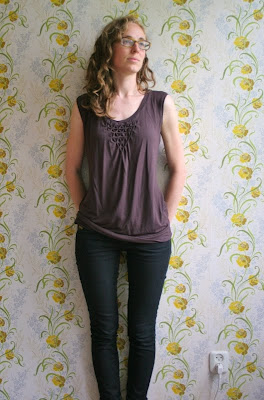 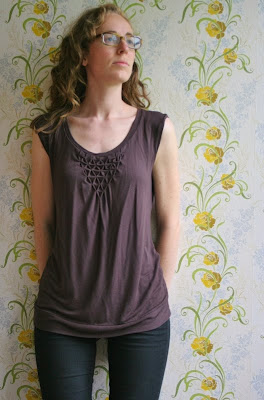 I like that it is so wide, the fabric is thin jersey so it still shows your figure. I made the cowl by slicing the pattern (Renfrew) in half and creating a V shape in the middle. This creates extra fabric down to the hem. I figured this out by looking at the shirt that I started to make. You can see the extra fabric there too. In my first muslin I only slice the top part in half, so the bottom half would still be sort of fitted. 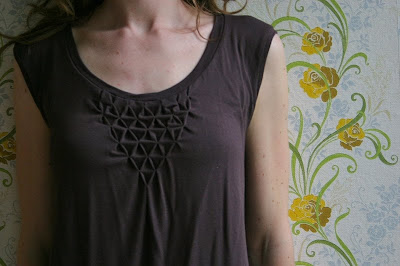 The tears involved in the top had to do with the neck and sleeve bindings. I had sewn them in without stretching the binding. They looked horrible, the neckline wrinkling at the curve and the sleeves sticking out. I couldn't figure out how this worked. I could have just looked it up, but in the end I figured it out through some logical thinking. Why take the easy way if you can figure it out yourself, eh? (Right, next time I'll save me some frustration and lost hours picking seams and look these things up. Duh!) Anyway, they look pretty much OK now. The smocking is a little messy in the corner, I still have to fix that.  I've listed two tutorials for smocking here, in case you want to try it. Smocking seems like an oldfashioned technique to me, but maybe that's just because my grandmother made me a smocked dress when I was 3. I love the structured effect though, it makes it look interesting yet it could still count as a fairly basic top. And it does draw some attention, I've seen several peoples' eyes wander in this direction for longer than usual. Which was not exactly the intention, but a logical consequence come to think of it. ("Stacked Triforce Triangles" said a certain someone. I guess we all have our distinct frame of reference :)) What are your thoughts, would you try it? Do you consider it modern or oldfashioned?