Last winter, my grandfather moved to a home for the elderly. He and my grandmother, who passed away three years ago, had been living there for almost forty years. So naturally clearing out the house was something that took my father and uncle over a month. By the time that only a few boxes were left, I got to choose some things I wanted to have as a memory. The things that were left represented all different styles and era's; their spring cleanings had apparently never been very thorough.

Among other things, I chose an orange teapot that came literally right out of the seventies. I had never seen it before in use, but I could imagine my grandmother (I could almost certainly say i would not have been my grandfather, as they lead a traditional household where she made decisions about teapots) in a shop and buying this teapot, because she liked maybe its colour or its shape. It's a great teapot, as in that it pours the tea perfectly without spilling a drop. But it's also forty years old and rusty, so we can't use it in the way it was originally meant. It's function has not been lost though, for now we use it to water the plants, which utilizes its non-spilling quality just as much. 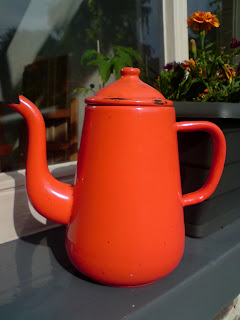 Another object I found were old sunglasses. I suspect they're from about the same period as the teapot. They are the kind of glasses you see a lot nowadays, I think they're called aviator sunglasses. I kind of like them, but I didn't buy them before because everybody was already wearing them. Such a non-conforming statement can't be taken too seriously though, because most of the time you can't avoid what's 'in' completely. But now I have a pair that have already been an item of style a long time ago. I can actually wear sunglasses that belonged to my grandfather and be fashionable at the same time. I like retro fashion, but this kind of retro is my favourite! 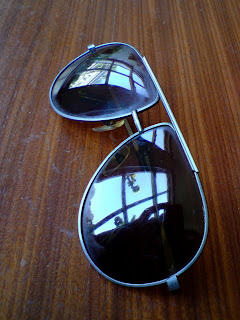