When I wear somthing that I've just made, I usually am not very concious about it. But with this new sweater, I was so happy with the execution and the outcome in general that I was hoping that people would say something about it. That did not happen: maybe because it is a nice, but not a super special sweater. I've been wearing it almost non stop because it goes so well with the rest of my self made wardrobe. Or at least with my mustard skirt and the folded mini skirts.


The dog had to get in the way ofcourse. When I set up the tripod, she, knowing the drill by now, immediately installed herself at the spot I usually stand. I am not the kind of person who puts clothes on their dog, but she would be a great model, hehe. Anyway: I used the Renfrew again as a sloper and adjusted it to make batwings. The only thing I should've done is a square shoulder adjustment, IF I had known such a thing existed. Tanit Isis just mentioned it and I think that would be a good idea for me too. I wanted to keep it simple but interesting, so I added the buttons at the back. They are functionable, but I don't use them. I actually managed to sew them in evenly spaced intervals this time :). The fabric is sort of a synthetic knit. Not the best fabric there is, but it's good enough for this purpose. The fabric covered buttons come from a second hand jacket my mother was going to give to the thrift store. So to the person who is looking at that jacket now: I'm sorry I ripped off the buttons! They were just destined to be used on this sweater!

For those who have the Renfrew pattern and want to know how to turn it into a batwing shirt, I made a drawing. I used the same technique for the back and the front, with the only adjustment that I added more to the neckline at the back. For the sleeve measurement, just take the sleeve pattern, measure it down the middle and add this length from the shoulder onwards. Depending on whether you want to add the cuffs, add this length (-3cm seam allowance) to the sleeve length. Same with the waistband. I chose not to add it this time and added the waistband length (again -3cm seam allowance) to the bottom of the bodice. You can draw the batwing curve as big or small as you want. I chose a rather small curve this time, but I'll be using it soon with a bigger curve as well. Tasia gave you three options, now you have a fourth! 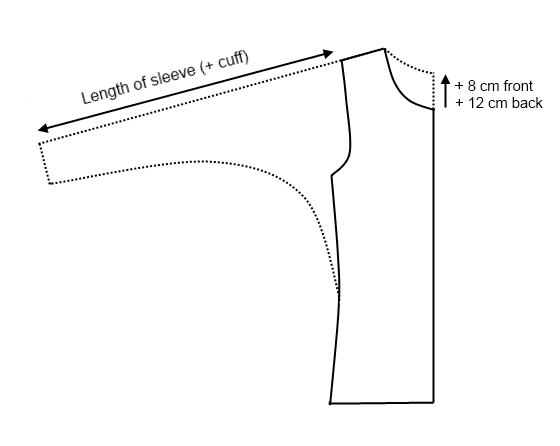