I have finally finished something that has been on my needles since early spring. It was the first project I knitted out of a 'modern' knitting book. Before this I really didn't know there were such things as cool patterns! I just knew the old fashioned books I got from my grandma. There's so much I want to knit now, I don't know where to start! I hope I'll be able to make my own patterns one day. The trouble with knitting as opposed to sewing is that it's much harder to correct a mistake. It takes a lot more time because you have to start all over, instead of just taking out a seam. This short vest took me quite a long time, not because of the mistakes, but due to the size of the stitches. Look at how small they are! It seemed there was just no end to it. 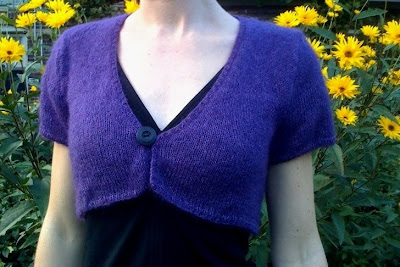 Although it looks quite simple, I learned a few new techniques while making this, such as making a neat little edge. I made some changes to the pattern though; you're supposed to knit small shiny beads into it, but I'm not really fond of glitter. I also used a button for the closing, instead of a ribbon. I'm not sure about it though, I think the button is a bit boring. Maybe I should use a different button, add a button, or use a ribbon after all... Hmm.