Finally, finally I was able to make something new this week. I was so excited to get this project out of my head and into reality. I walked around with this idea for weeks, and I'm so glad it turned out exactly as I imagined it! 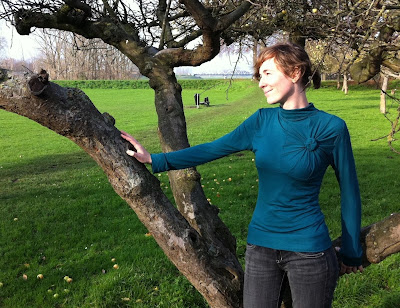 I was inspired by Rensz' T-shirt. She's working on digitalising the pattern, but I just couldn't wait! On top of that, a friend had borrowed all my sewing magazines. I had to take apart an old shirt to use as a pattern, but it worked just as well. Maybe even better: you can predict much better how it will fit.

I used the idea of no shoulder seams, but only on one shoulder. It wouldn't work for the flower-side. The flower was easy to make: take a piece of cloth, pull it up and wrap a thread around it. To make neat folds, pin them down as they've shaped themselves. Then cut it into the right shape, and sew it into the whole.


The goal was to add some details to the whole, but keep it simple at the same time. I think I've accomplished that by using the same fabric for all the details. That's why I made the buttons on the back invisible, and added fake buttons, made from the same fabric. I agree with what Rensz says about the back: you might not be able to see it, but other people see it just as often as your face. This part was actually quite hard: my sewing machine did not agree on sewing a straight line close to the invisible buttons... 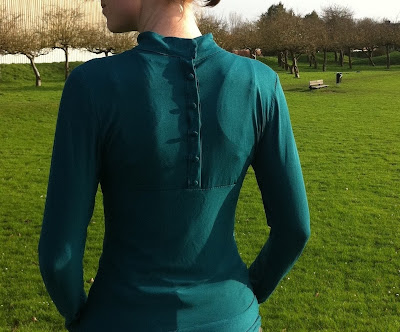 But it turned out very nice on the whole, and I'm very proud to show you this! If I don't get that job, it won't be because of this shirt...